Christian auditioned for the Academy in the very first episode because his mom was a dancer.

A few episodes in, Christian was caught committing a crime, and his lawyer and the Academy's principal both agreed that if Christian could prove his dedication to becoming a dancer, then the court would let him go free. Initially, Christian is cold towards everybody. He steals Ethan's wallet after meeting Ethan for the first time, he makes fun of Tara's quirks and lack of relationship experience, and he refuses to become Sammy's "mate.

Later in the season, he falls for Tara. Tara initially rejects his advances, but the two later get together but break up soon thereafter. 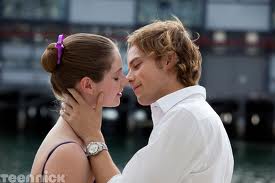 After the year ends, Christian stays with Tara's family over the holiday. Christian enters the new year as Tara's boyfriend. The two grow closer and stronger as a couple; however, Tara interferes with Christian's personal life by seeking out his father, so Christian breaks up with her. Shortly afterwards, Christian attempts to get back together with Tara, but she rejects him. Christian reveals that he's had feelings for Kat for a long time and makes a move on her, and the two get together.

However, when Tara returns to the Academy after leaving to recover from her broken back, Christian realizes that he still loves her. Kat recognizes this and breaks up with him. Christian attempts to pursue Tara once more, but Sammy's death intervenes. At the end of the season, Tara invites Christian to stay at the farm again for the holiday. He tries to reveal his feelings for Tara, to which she responds that things feel more right with him than Ben, her current boyfriend.

Christian decides to spend the summer with his dad, telling Tara that he'll be back for third year. It is a few weeks into the school year and Christian still hasn't returned.

Christian & Tara - I'd rather be with you.

Everybody has been calling and texting him, but he hasn't been responding. He's still with his dad, spending each day with a bunch of blowouts. Tara locates and visits him, attempting to persuade him to come back to the Academy. He steals his dad's motorcycle and rides back to the Academy, but he has lost his passion for dance, so Abigail takes him to an event where he's forced to dance and regain his passion. He is still cold towards almost everybody else, blowing up at Tara nearly every time she attempts to talk to him.

The third-year tour's performance is "Romeo and Juliet," and he's cast as The Nurse but is understudying Romeo. During the tour, he races Ben in a nude race, competing for the role of Romeo. After getting the role, he visits Tara, who is crying because she wants to move on from Christian but hasn't been able to.

Christian spends the night, but attempts to push her away again by claiming that nothing happened between them. Tara breaks up with Ben, and Christian competes in a hip-hop competition.


He realizes that he needs to get his priorities in check and decides that he wants to get into the Company and he also wants to be with Tara. He goes out with Tara and the two decide to be together, but they find it hard to talk to one another. Although they break off the relationship, Christian reveals that he doesn't think he could ever love anyone the way he loves Tara.

Ultimately, Christian scores a contract with the Company, but after the Samuel Lieberman Memorial Studio is created, he decides to teach there rather than accept the Company's offer. Eight months afterwards, the studio opens officially, and Christian vows to support Tara after she has once again broken her back.

Christian is first seen teaching students at the Samuel Lieberman Memorial Studio. If a robber tried to rob a dance club and yelled, "Everybody get down", would all the people start dancing? What is the song Tara and Ben dance to in Season 3 Episode 1? Did Tom Green quit Dance Academy?

Contemporary or Modern dance? What are the main dance moves and hand gestures that artists and hip hop fans use in music videos and other videos? Is it too late if i start modern ballet when im almost 19? While things are complicated between the two, Tara still stands by him especially during his trial and even invites him to stay with her at the farm during the holiday break.

They rekindle their romance during the beginning of season 2 while Christian stayed at Tara's farm for the Christmas holiday. Tara realizes that she is in love with Christian and discovers that Christian feels the same way. They are so happy as a couple that Miss Raine feels they need to focus on their ballet more, and Tara agreed and put their relationship on a 'pause'. Christian thinks that means she wants to break up with him and turns a cold shoulder towards her. Tara then explains that she doesn't want to break up with him.

Tara and Christian make up, but Tara meddles in Christian's broken family matters and tries to find Christian's dad. Christian gets upset at Tara and they don't speak to each other.